MainFear and hatred of Generations Y and Z. Part 2: what should marketers do with this?

Fear and hatred of Generations Y and Z. Part 2: what should marketers do with this? 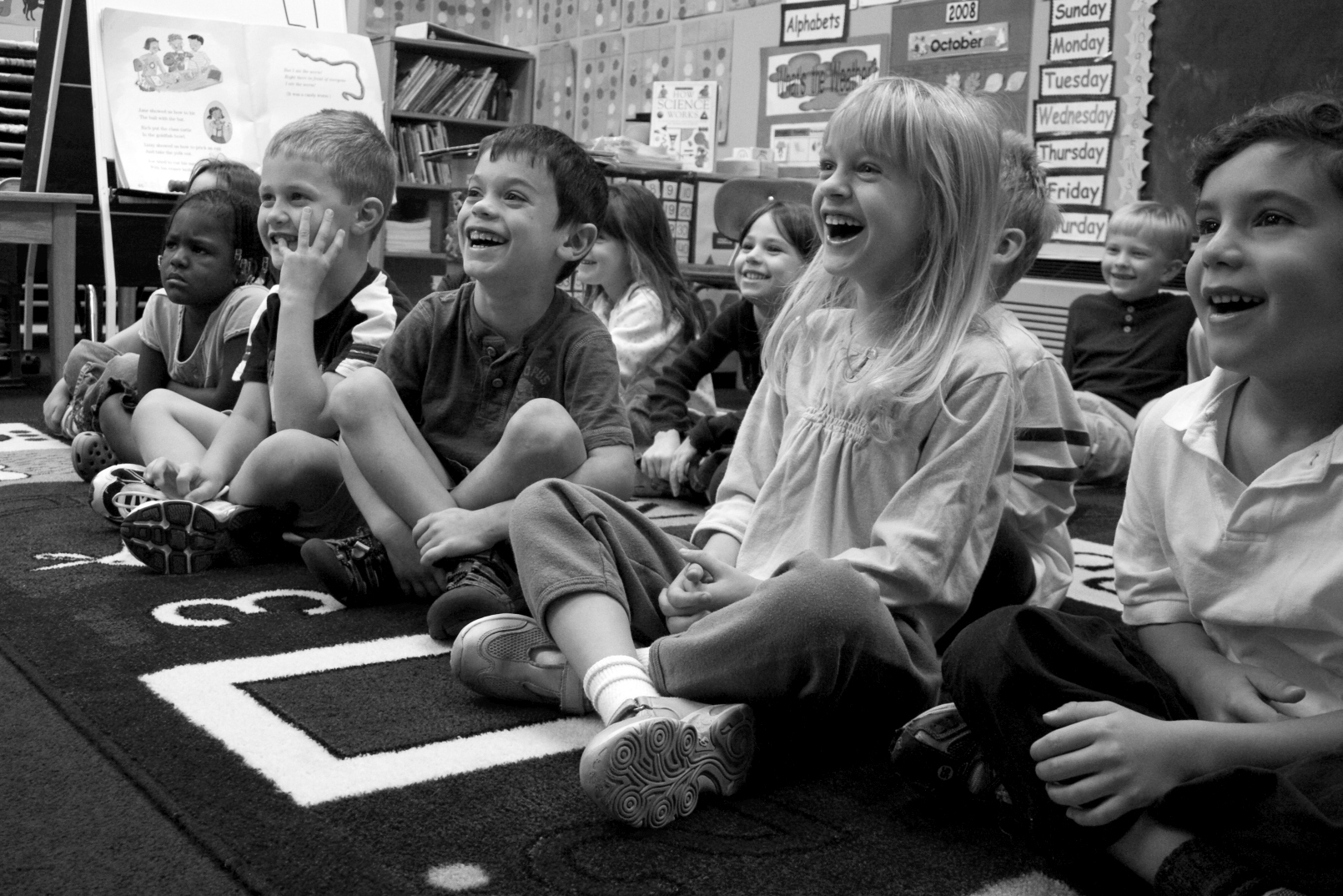 We continue the topic touched upon by Deloitte's global survey in 2019 among the so-called millenniums and homelanders — representatives of generations Y and Z.

As far as millenials can be the "Generation of Destruction", so can their behavior and choices cause serious damage to both business and society.

The highest number of millenials that Deloitte has ever surveyed — 49%, if they had a choice, would give up their current jobs within the next 2 years. In the 2017 report, the number was 38%. And these are not empty threats: about a quarter of those who reported quitting within 2 years said they did quit their employer in the last 24 months. This is the real problem for companies that are looking for a stable, skilled workforce.

Reasons for wanting to leave the company so soon are not surprising. Dissatisfaction with payment, lack of promotion and professional development opportunities top the list. Rather, it is surprising that the lack of diversity and integration was at the end of the list of reasons why people left their jobs. After all, last year's study showed that diversity is key to loyalty.

It helps to understand that certain characteristics may attract millenniums and make them want to join or stay with employers, but the lack of these characteristics does not necessarily force someone to leave.

There is also encouraging news: the number of millenials who expect to stay with their employers for 5 years or more has remained the same as last year: 28%. There were strong correlations between those who are planning to stay in their current jobs and those who said that their companies are best at financial performance, social impact, talent development, diversity and engagement. Perhaps that's why many companies, which traditionally focused primarily on profitability, are now working hard to adopt new approaches to business that match the expectations of Generations Y and Z. 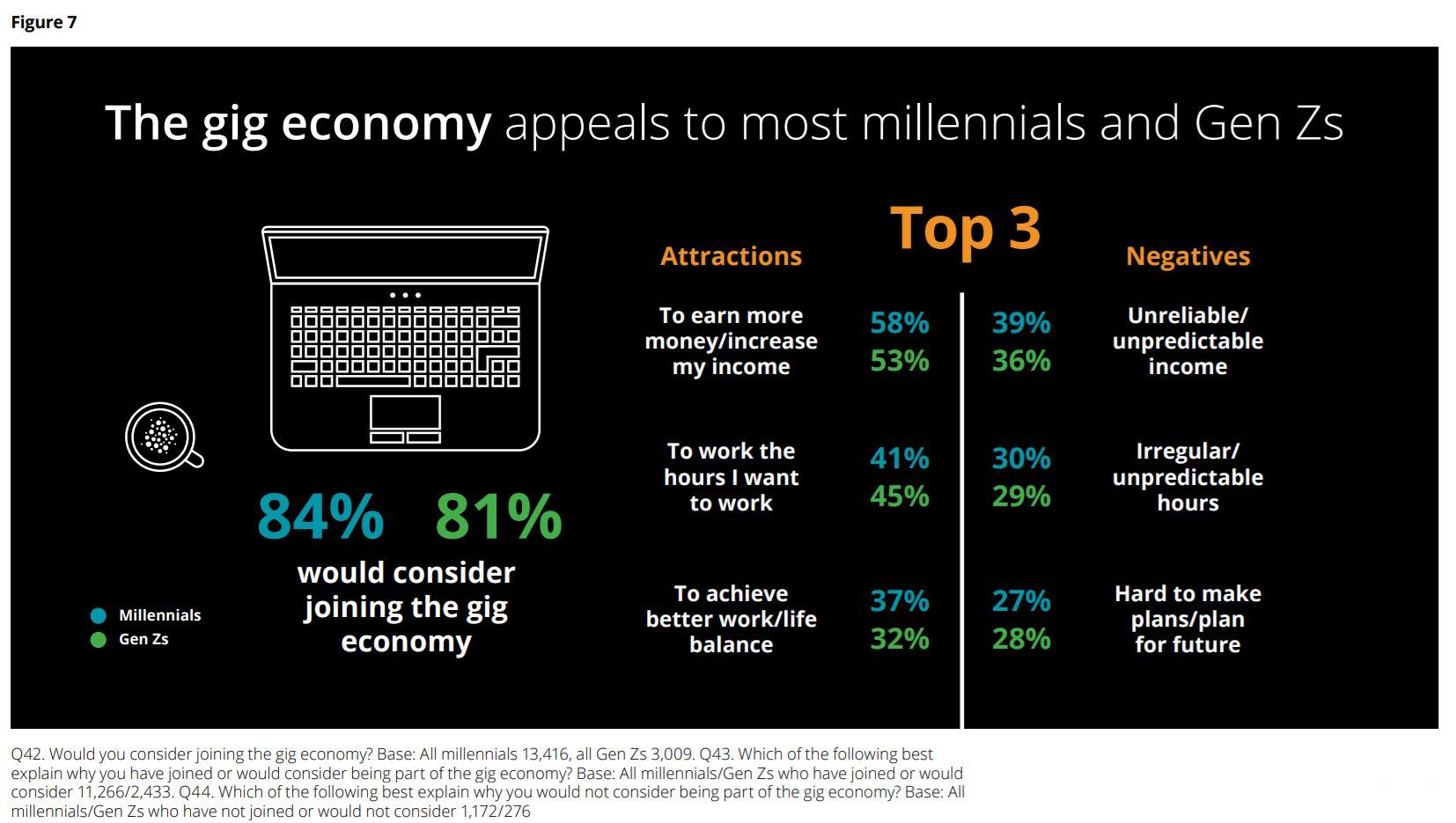 The millenniums showed that they wouldn't hesitate to switch to freelance or contract work. In general, hygonomics (free, short-term form of employment) attracts 4 out of 5 millenniums and homelanders. Only 6% of those surveyed said they decided to become part of the freelance instead of full-time work. At the same time, 50% said they would take this opportunity into account, while 61% would use it to supplement their employment.

Millenials who would like to join the freelance are most often referred to as an advantage:

On the other hand, the perceived uncertainty around the same Top 3 is the main reason why some will not take this type of economy into account. Unpredictable income and working hours are the biggest drawbacks (39% and 30% respectively), accompanied by inherent difficulties in making plans for the future (27%). 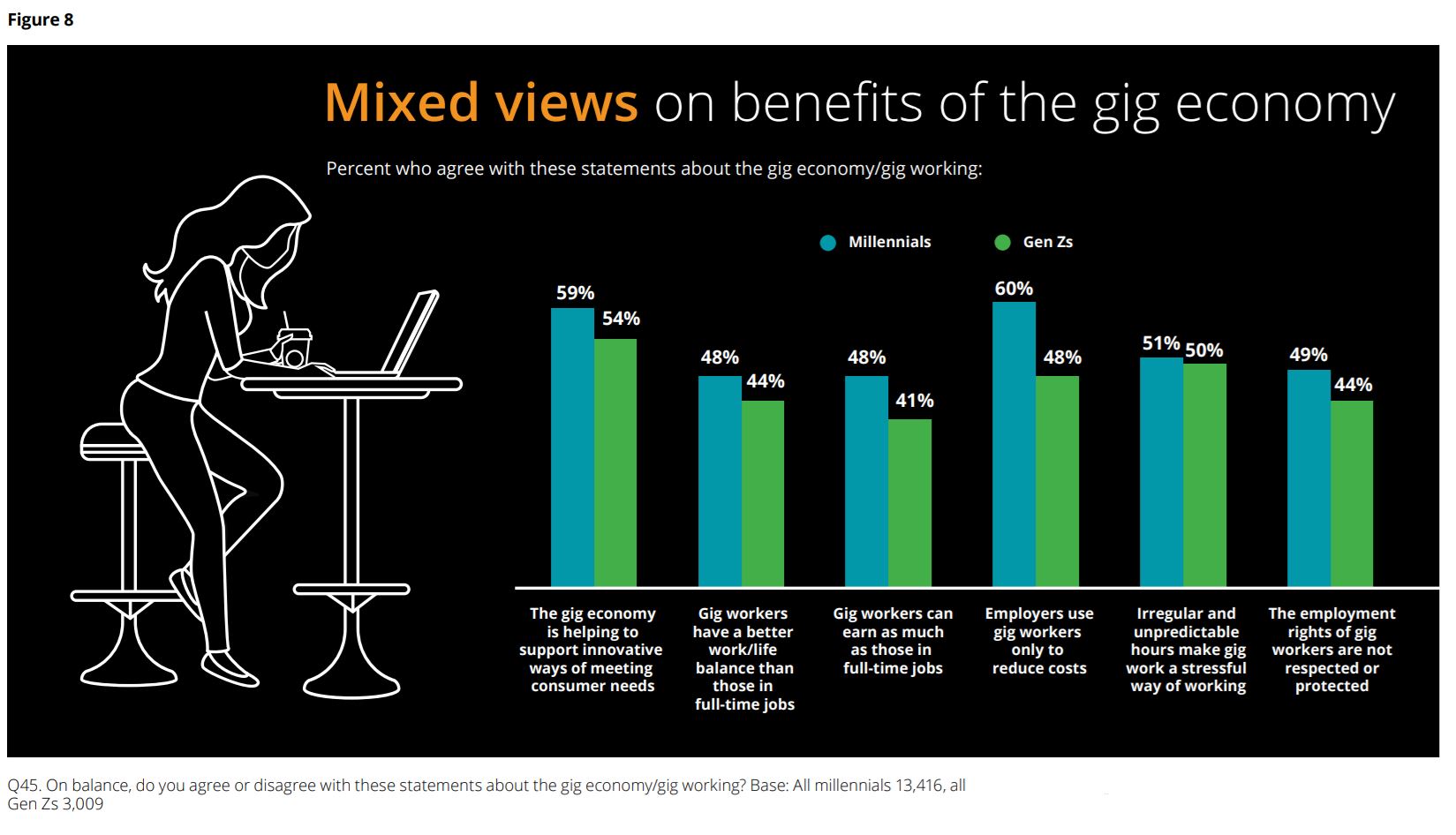 The devastation caused by millenials is evident in a growing number of companies. Especially among those that offer flexible work schemes and other functions only to simulate what attracts those interested in contract work.

Consumerism — moving from words to deeds 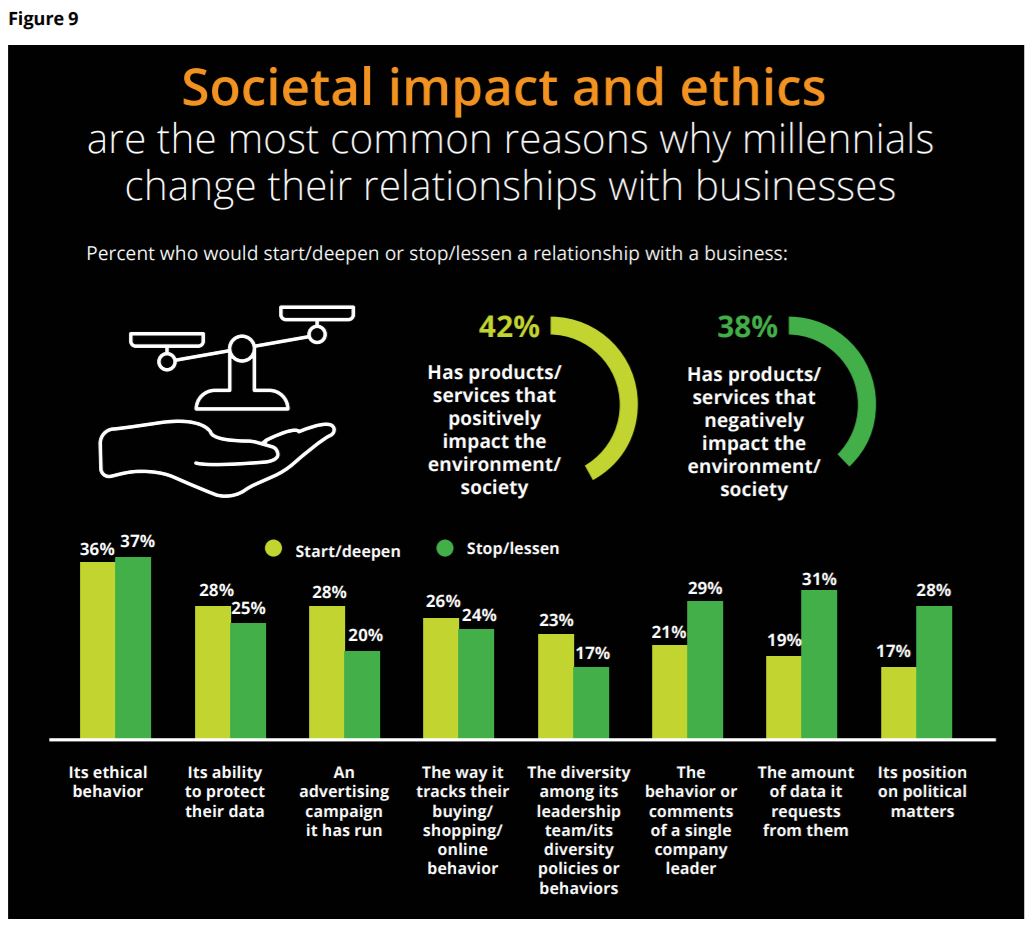 Young people treat their wallets in ways that seem different from previous generations. All Y&Z consumers are receptive to advertising and will be disappointed with poor service or poor quality products. However, millenniums and homeblenders start and end relationships with companies for very personal reasons, often related to the positive or negative impact of the company on society.

Among other observations related to the attitude of new generations to consumerism:

- Y&Z notice political beliefs. More than a quarter of millenniums said they turned their back on the organization because of its position on political issues, and 29% did the same because of the behavior or comments of the company leader. Conversely, few noted that they were attracted by the company because of its policies (17%) or because of what the leader said or did (21%). Today's consumers believe that they lose more than they acquire when they turn to companies with any political interests.
- Y&Z is tired of invading their privacy! About a third of respondents said they have stopped or restricted their business relations because of the amount of personal data requested by the company. A quarter did the same, either because of the company's inability to protect their personal data or because of how the company monitors and attempts to manipulate users regarding their shopping and online behavior. 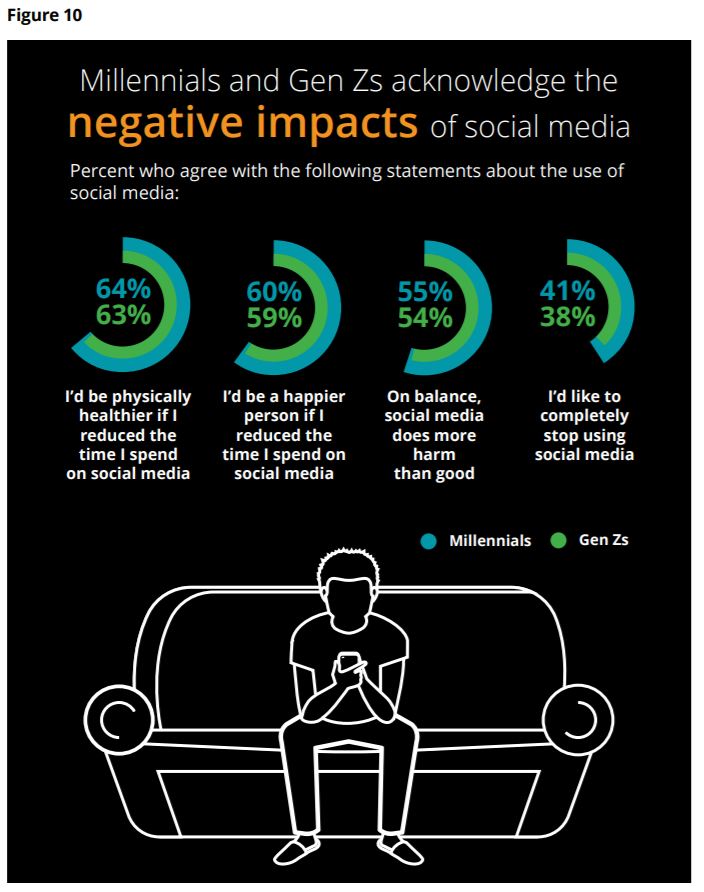 Social media and their mobile applications can be great things that allow people to stay in touch, chat with old friends and distant relatives, or simply access relevant information. But the same things can also be used with malicious intent — trolling or intimidating others, spreading propaganda and even committing heinous crimes live. Thus, it goes without saying that millenials and homelanders can both love and hate digital devices and social networks.

When asked about their use of digital devices and social networks, 71% of those surveyed said they felt quite positive or very positive. But a deep dive into the data reveals a more interesting picture

– Nearly two-thirds (64%) think they will be healthier physically if they reduce their time spent on social networks. 6 out of 10 think it would make them happier.
– 55% said that social networks in general do more harm than good.
– 44% admitted that failure to scroll through a news feed for a day or two makes them feel a certain discomfort.
– 4 out of 10 want to stop using social networks completely. In mature markets, more people would like to give up social network accounts than in emerging markets (44% vs. 36%). 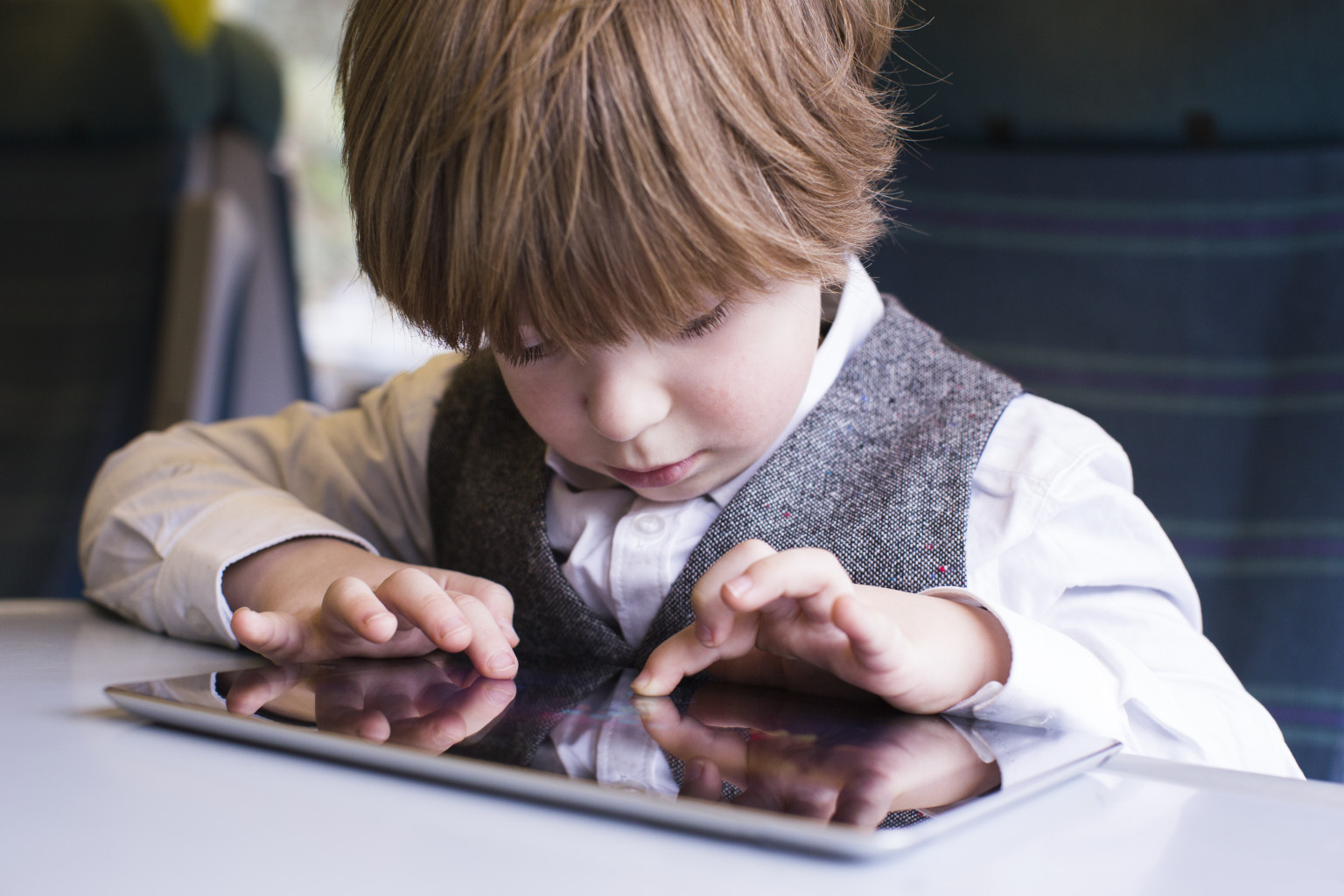 "The Generation of Destruction" proved to be a double-edged sword. It has advanced world progress in ways that have radically improved our daily lives. And it has also changed the structure of society, creating new, complex problems. Nothing illustrates this better than the love and hatred of millenniums with home movies for social media.

The events of the last decade have had a huge impact on younger generations. But there's something particularly disturbing about the last two years. This is all the more noticeable in the sharp negative decline observed in respondents' views on the economy, social and political situation in the country, as well as on institutions such as government, media and business. Given the importance of Generation Y and Z representatives for modern business — both as the most mass consumer and as the vast majority of potential employees — the results of the Deloitte survey in 2019 should be taken into account by top management around the world.

This survey provides compelling clues to business leaders. For example, millenials and homelanders show greater loyalty to the employers who bravely address the issues that concern Y&Z most: such as environmental protection and unemployment. And as consumers, they tend to spend their money on goods and services from brands that talk about these issues and help solve them.

What does the Deloitte survey mean for business?

Millenials and homelanders want all the conversations that modern business has to offer to be meaningful actions and business leaders to be agents of positive change. They expect business to improve their lives and livelihoods, but they don't see enough businesses to fill this ringing void.

By providing a marketing strategy that includes plans to meet public needs, and that recognizes the personal and public concerns that are greatest for millenniums and homelanders, business can effectively engage and inspire loyalty among young generations.

As employers, business leaders must:

— Start a dialogue with their employees from Generations Y and Z, listen to their concerns and try to understand why certain issues really matter to them.
— Ask them how they can help people realize their ambitions.
— Help them prepare for the future by providing training and tools to succeed.
— Take visible and strong principled positions to demonstrate their responsibility to influence society.

As global citizens with a powerful ability to change the world, businesses must:

— Balance profits with protecting the planet and helping to solve society's most complex problems.
— Create a culture that promotes diversity, inclusion and social mobility.
— Train people in their organizations to promote behaviours and attitudes that support their business priorities.
— Work with other businesses, government and educators to transform learning and give people the skills they need to meet their future work needs.
— Take the initiative to protect their operations and users' personal data from physical and digital threats.
— Examine your own ethics, behaviour and ask if they are too invasive of people's personal space.
— Show internally and externally that they are doing everything to make the world a better place. 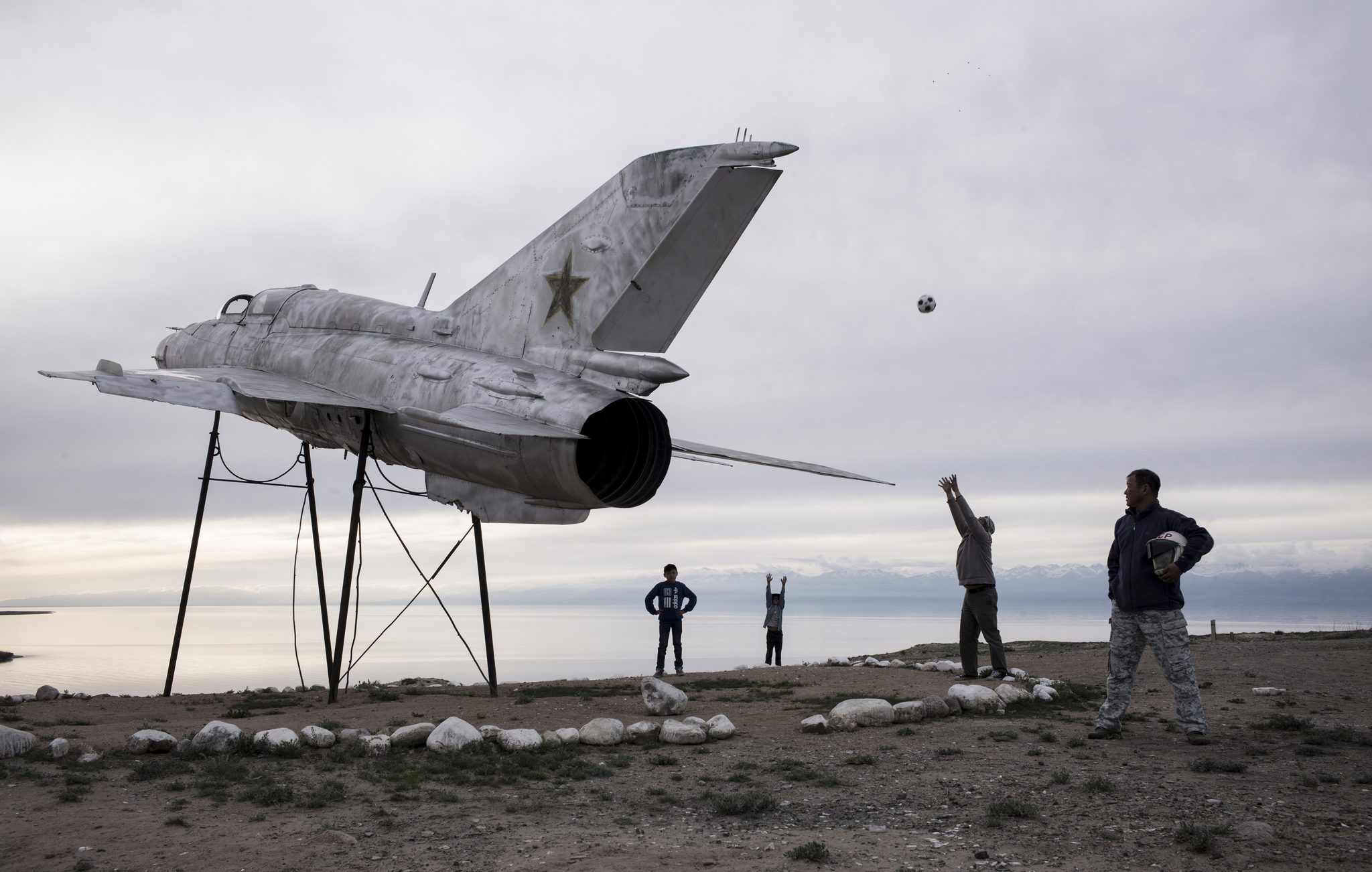 Millenials and homelanders together make up more than half the world's population and most of the global workforce. This is not the future, this is the present. They can create or destroy entire businesses and are not afraid of having their wallets speak for them. For leaders in government and business, there is a huge, genuine opportunity to win the hearts and minds of the younger generation. But only for those who can make their future brighter and brighter.

For the past few years, there has been a growing trend among customers toward eco-friendly consumption and healthy eating. Quarantine has forced many of us to take our health more […]

Ustor has implemented a project for MasterZoo. This is a national network of pet shops, which includes more than 80 outlets across Ukraine. The professional approach to the client’s tasks […]

The pandemic is changing our lifestyles and habits, including our shopping habits. In 2020, online sales amounted to $189 billion, which is 33% more than in 2019. Retail is flexible […]