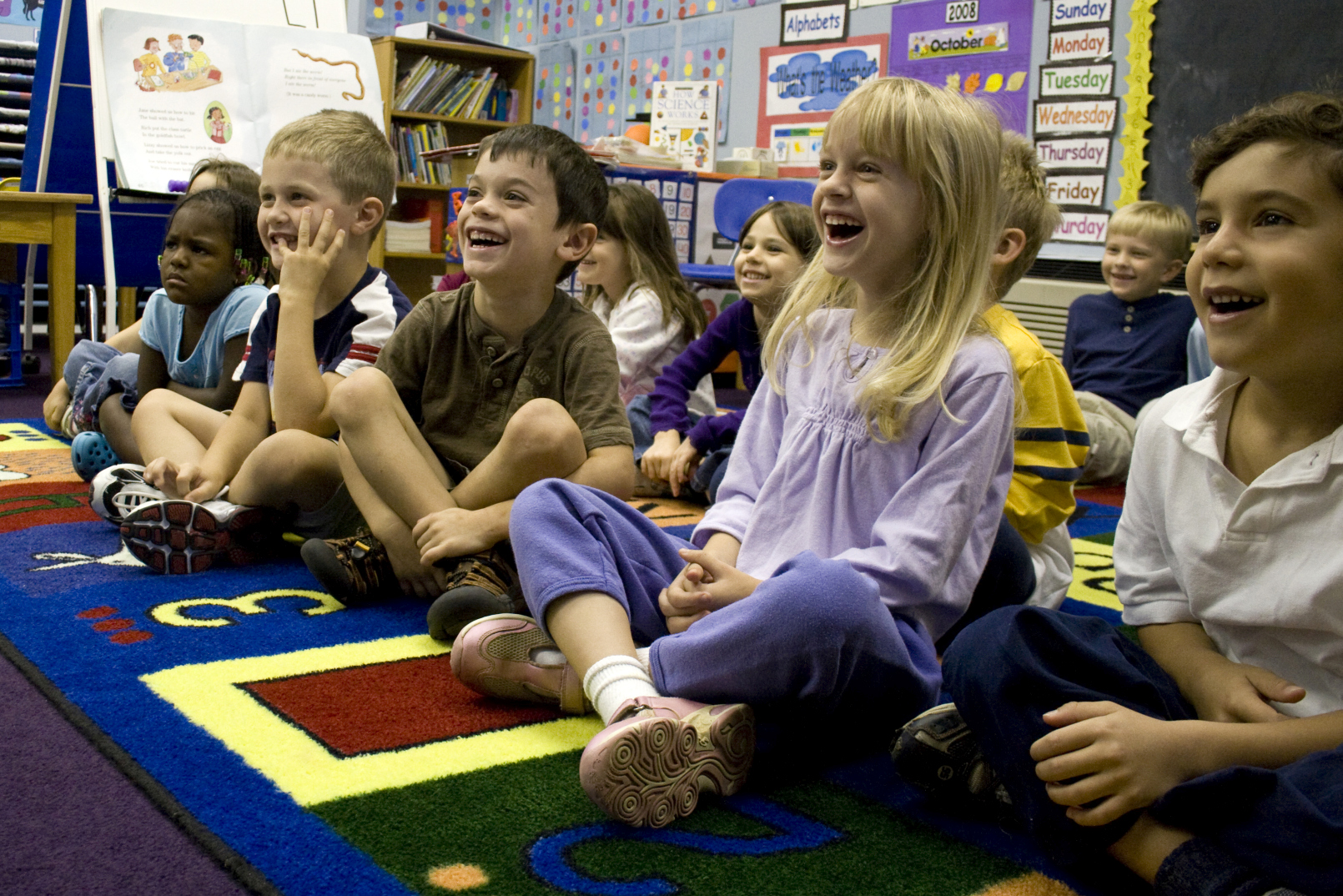 Deloitte shared the results of a global survey conducted in 2019 among the largest consumer group — Generations Y and Z. People who were born in periods were surveyed:

This is the largest study of its kind in the last 8 years. In 2019, the survey covered the most diverse group of respondents to form a comprehensive perspective in building a psychological portrait of the mass consumer.

Deloitte Touche Tohmatsu Ltd is an international network of companies providing professional services in consulting, auditing and risk management. It is part of the famous "Big Four". Annual turnover: about 40 billion US dollars.

How do representatives of generations Z and Y see the future? Why do they not trust the media, commerce, government? What do you expect from them as consumers? The answers given by millenials (Y) and homelanders (Z) have often been surprisingly similar. For this reason, the Deloitte report focuses on millennium responses, and the home user responses are only mentioned when they are clearly different.

The global economic crisis, social dissonance and technological transformation have created a "Generation of Destruction". 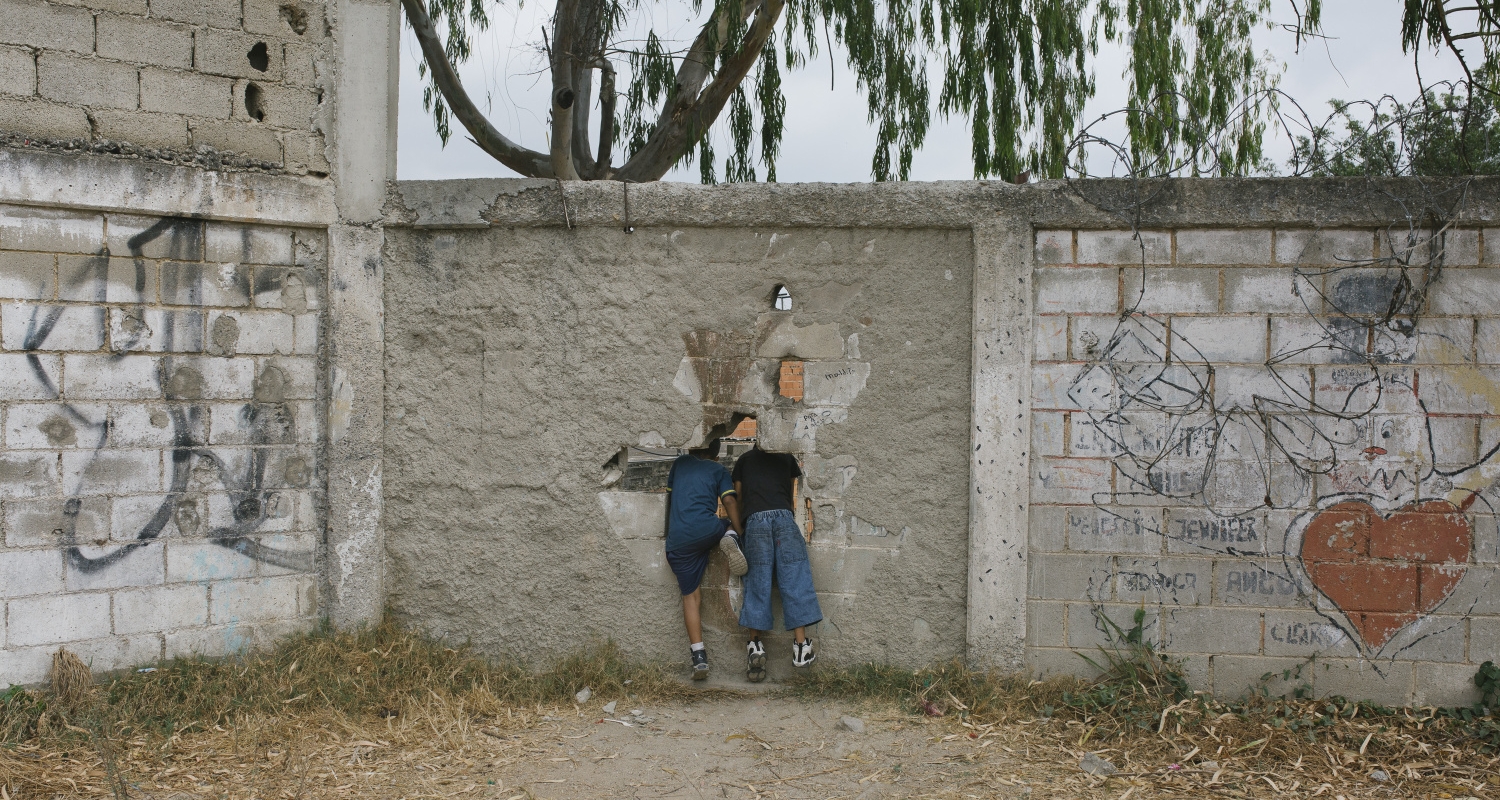 Generations Y and Z grew up in a unique time period: between an economic recession and the fourth industrial revolution. They were constantly in the crossfire of social, political and economic unrest.

And while millenials entered the labour market when the crisis was just unfolding, most homelanders spent half their lives in the world after the disaster. The economic downturn of the late 2000s is considered by experts to be the main factor that makes these people full of distrust rather than optimism about their career, their life in general and the world around them.

However, the roots of this distrust lie much deeper in the economy. Unlike the post-war 1950s, which were characterized by international cooperation, a baby boom and economic expansion, the past decade has been marked:

— a sharp increase in material inequality in society;
— radical tribalism and a decline in security in social networks;
— isolated and disadvantaged governments;
— significant changes in contracts between employers and employees;
— industrial technologies that have changed the concept of workspace;
— technologies that have made people both more connected and more isolated from each other.

Millenials and homelanders are just as ambitious as previous generations: more than half want to earn high wages and be rich. But their priorities have changed or been postponed due to financial and other constraints.

Having children, buying their own house/apartment and other traditional "success markers" in adulthood do not lead the charts of their ambitions. Instead, travel and exploration were at the top of the list (57% of aspirations), while just under half said they wanted a home (49%). They were also more likely to have a positive impact in their communities or society at large (46%) than to have children and start families (39%).

Interestingly, women (62%) were more interested in seeing the world than men (51%).

Earning a lot and being rich is second to none (52%) of all ambitions. But this aspiration was the last one when respondents were asked whether their ambitions were achievable: only 60% considered it possible.

As a rule, Y&Z believe that their ambitions are achievable:

A vision of the world and personal concern for society's problems 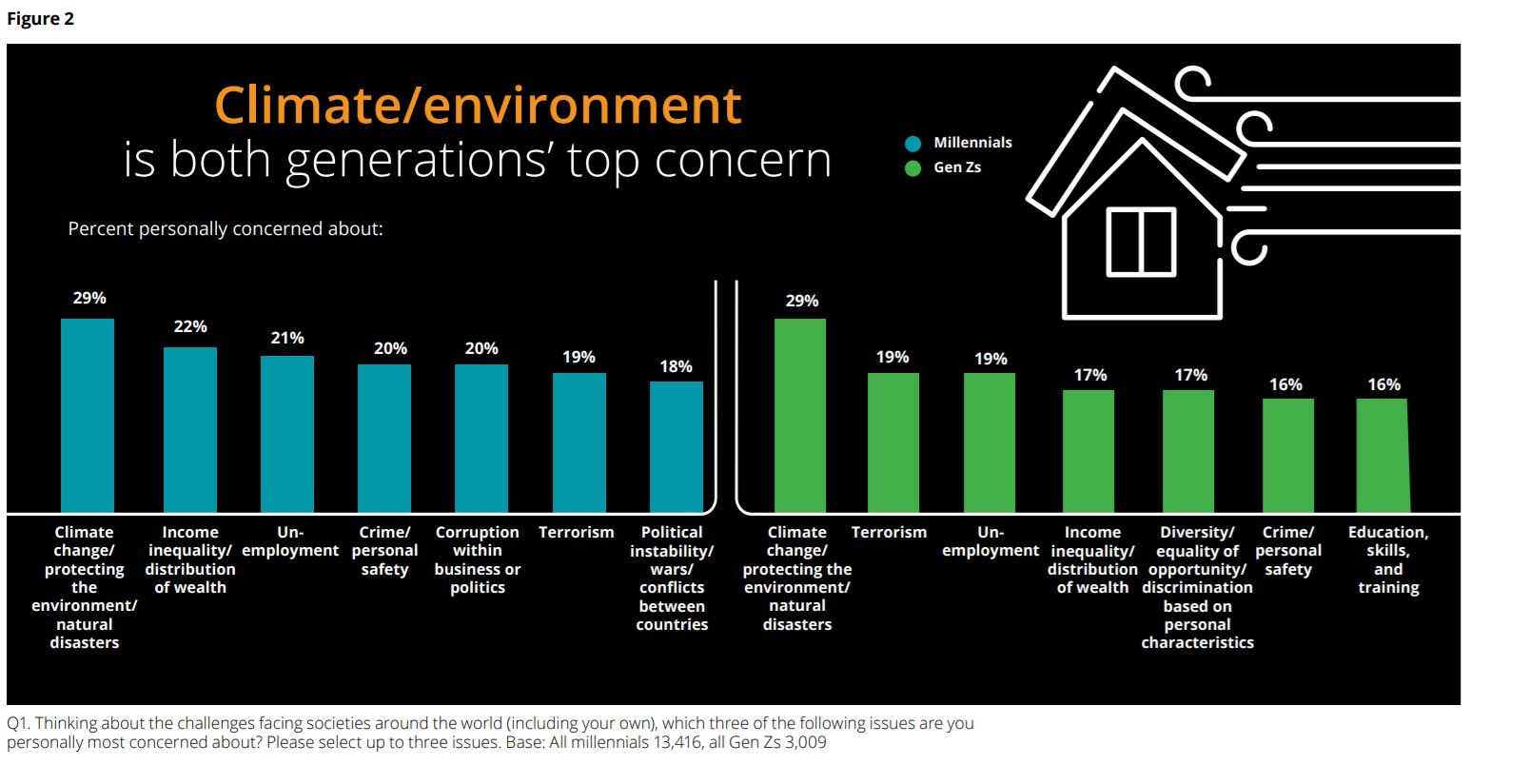 Each year Deloitte polls millenials on global social and personal issues to see how their vision of the world is evolving. This year, there is a noticeable drop in optimism and a wide range of both macroeconomic and everyday concerns affecting the minds of Y&Z.

Among the 20 issues facing society that most concern respondents at the personal level, both groups have the list at the top: climate change, environmental protection and natural disasters.

— 29% of millenniums considered this an anxiety 7 points higher than income/wealth distribution inequality.
— 29% of homelanders thought it was even more alarming than terrorism and unemployment.

Terrorism, crime and war are among the seven leaders. This shows that personal security is the number one concern today. It is also interesting that there is a correlation between education and whether millenniums' concerns are more personal or social. High school graduates are more likely to choose unemployment, personal security and health care than university graduates, and less likely to choose political instability, climate change and cybersecurity.

Almost four out of five (79 per cent) of millenials are afraid of being victims of online fraud, and almost as many people are concerned about identity theft. They also worry about the security of personal data owned by businesses (73%) and government agencies (70%).

Worst expectations from the economy in recent years 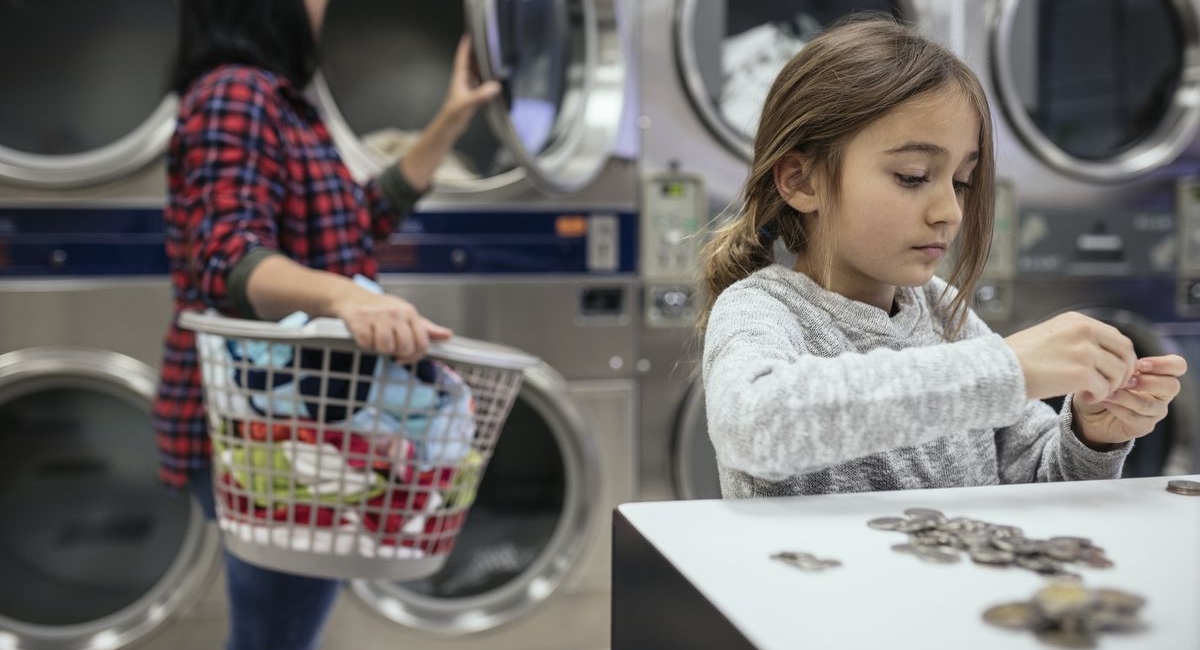 Positive economic sentiment in 2019 was the lowest in 6 years. Only 26% of Y&Z respondents said they expect the economic situation in their countries to improve next year. This figure has never dropped below 40% before and has been 45% for the last 2 years.

As in 2018, sentiment in developing countries is more positive than in mature markets, but even in the most encouraging group there is a sharp decline. In emerging regions, 36% of millennials expect improvement over the next 12 months — a 21-point drop in just 2 years. In mature markets, the rate is only 18% compared to 37% last year.

From a personal point of view, just over half of millenniums think their financial position will deteriorate or remain the same, while 43% expect improvement next year. Expectations that the financial burden will exceed any career progression or transition to higher paid jobs are further evidence of the tension and uncertainty of millenniums after the recession.

Doubt in traditional pillars of trust: leaders and media 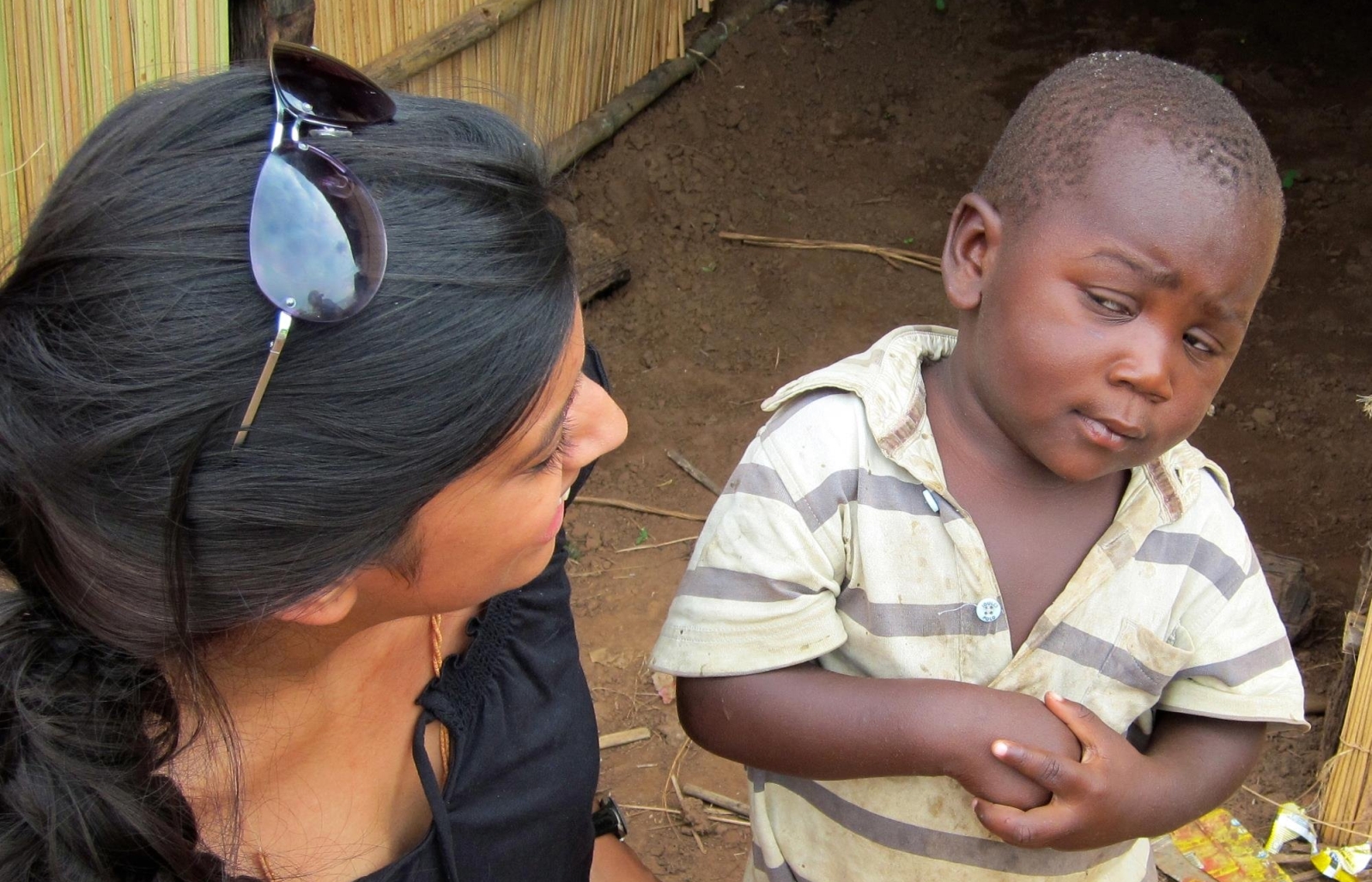 Positivity in the social and political climate is also in decline. In 2019, less than a quarter (22%) of respondents said they expected improvement in their countries next year — a third down from last year (33%). This trend is consistent both in emerging markets (30%, down by 9 points) and mature markets (16%, down by 11 points).

According to past polls, millenniums of low opinion about political and religious leaders. Nearly three-quarters (73%) said that political leaders could not have a positive impact on the world, while two-thirds said the same about religious leaders. About 45 percent of millenniums said they absolutely do not trust any of the leaders as a source of reliable and accurate information.

Perhaps even more disturbing is the respondents' opinion about traditional media. More than four out of ten (43%) said that the media have a negative impact on the world, while 27% do not trust the media at all as sources of reliable information (only 53% expressed some trust).

They see traditional media as a slightly more reliable source of news than social media platforms. But the question arises: if millenniums do not trust institutions set up to disseminate facts, who will they trust? Leaders of non-governmental and non-profit organizations were ranked first in terms of social impact and a source of reliable information, but it is not their job to report the news. Distrust of the media can only increase feelings of instability and insecurity in Generations Y and Z. 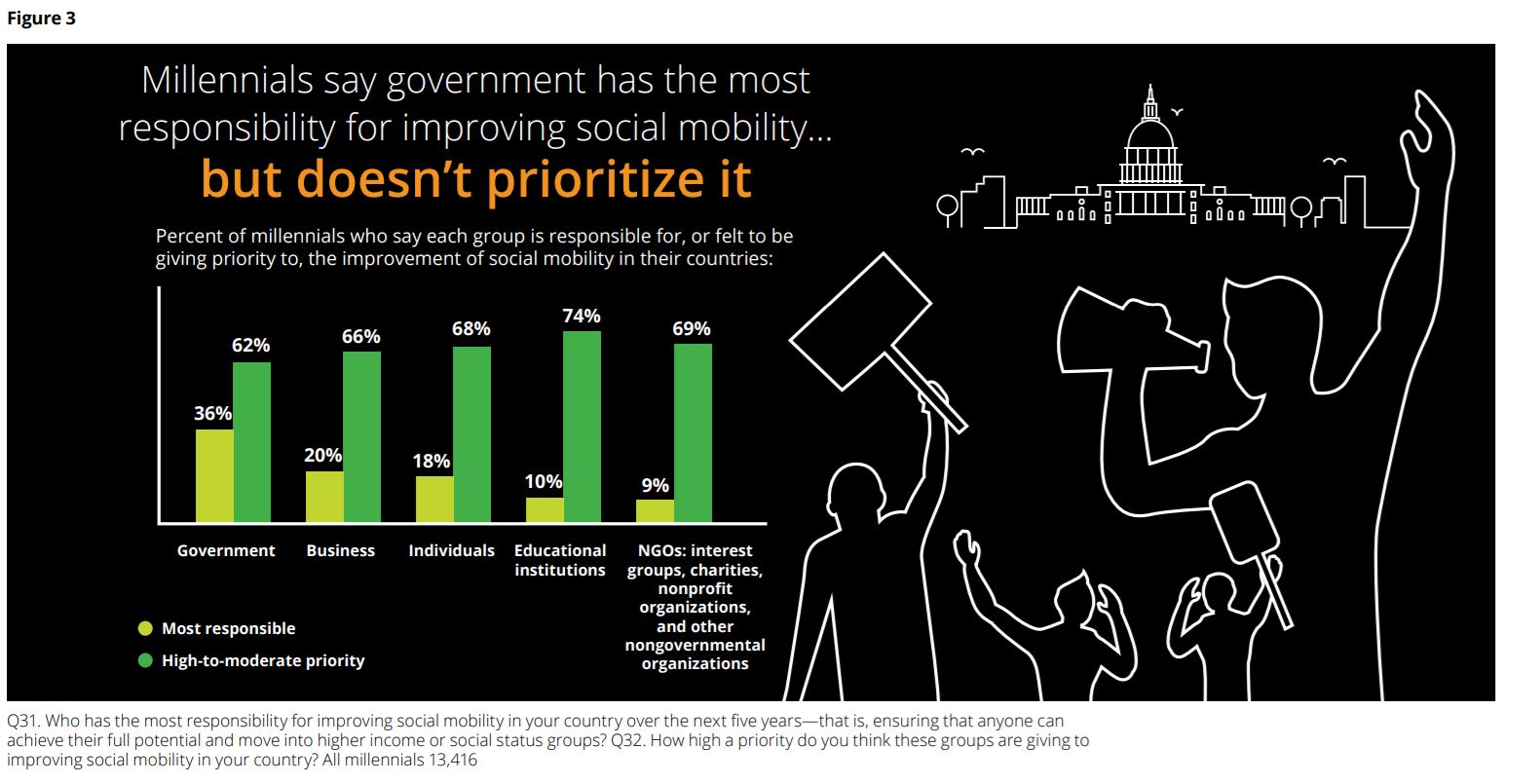 In terms of social progress, two thirds of those surveyed believe that because of their backround, some people never get a fair chance to succeed — no matter how hard they learn and work. But an equal number of respondents believe that anyone can succeed in a career or social status if they achieve it on their own: without connections or anyone else's help.

The survey was not intended to go into the respondents' reflections on specific government actions. Deloitte experts were more interested in their opinion on the growth of nationalism in some parts of the world.

Approximately in the ratio of 2 to 1 respondents said that they support free trade policy that allows the free flow of goods around the world, compared to nationalist policy, which limits the flow of goods into the country.
Despite this propensity for globalism, the general concern about increased nationalism has been alleviated. Of the 20 personal concerns offered by the survey as a choice, the rise in nationalism came in last place with only 7%. However, in Western Europe, including in countries where right-wing parties have made progress (e.g. Austria), many respondents were more concerned.

Millenials in business and their main priorities

Millenials' opinion of business continues to decline, proving that last year's sharp decline was not a deviation. After 4 years in a row from 70% and a decline to 61% in 2018, the number of respondents who said that business has a positive impact on society as a whole fell to 55%. The decline was caused by opinion in developing countries, which fell from 85% two years ago to 61% today. Opinion on the role of business in mature markets — 50%, dropped by 16 points over the same period.

This figure is partly due to a growing view that businesses are focused on their own programmes rather than on the wider society. 76% agree with this opinion, as well as with the fact that companies have no ambitions except for the desire to earn money (64% of respondents). It also probably depends on the continuing mismatch between the priorities of millenniums and what they consider to be the business goal. Millenials most often believe that business should prioritize the production of quality goods and services (36%) and job creation (35%).

Industrial progress 4.0 and its impact on industry

The impact of changes in industry on society cannot be underestimated. Over the past decade, many jobs in which people have been educated and skilled have changed significantly because of digital technology. Millenials are using technologies that were not even a thing of the past when they started their careers. And in some sectors, artificial intelligence now performs the tasks that define some jobs, forcing people in those jobs to apply various unique human skills. As the union of physical and digital assets becomes stronger, the impact of progress on workers will increase.

49% of millenniums believe that new technologies will expand their jobs. 25% expect the 4.0 industry to have no impact and only 15% fear that it will replace all or part of their jobs.

Millenials also note that the changing nature of the labour market may make it difficult for them to find or change jobs. Almost half (46 per cent) agreed with this statement as a whole, while 45 per cent of those currently unemployed or doing unpaid work said they saw big problems ahead.

Half of those who are optimistic about technological progress 4.0 also believe that building a successful career in its environment can be a difficult process. However, they assume that a strong economy will stimulate increased investment in even more advanced technologies.

Approximately one in five respondents believe that they have all the skills and knowledge necessary for the world in which industry 4.0 has emerged. 70% of respondents said they could have only some or more of the necessary skills and would need to develop their abilities to increase their own value in the labour market.

Look forward to continuing in the next part of our longread!..

About company Ustor has been working on the Ukrainian retail market for over 15 years. During this period, we have implemented a lot of non-food projects in such segments as […]

Sergey Zalkin: “Client-oriented approach and implementing of their brave ideas is our major interest”

Ustor collaboration with BabyShop began in 2017, with production of the Trunki and Tinto brand stands. And in 2018, we have already adapted their brand book for future stores for […]

How Displays for BabyShop Were Created

Most recently, Forrester conducted a survey that interviewed both retailers and buyers. The main task of the American company was to identify customer expectations and the willingness of companies to […]

Buyers want the convenience of online and offline shopping… But are retailers ready for it? [Forrester research]